Lucy Berkin: The Return of The Pug Queen

Well, Lucy Berkin (aka The Lovin’ Spoonful) made her majestic return to the Yoga Lab after a one-week hiatus during which she spent eating kibbles, imbibing lots of liquids, and contemplating all the changes she’s seen in the world during her 13 years on this earth, and did she ever have a blowout 13th birthday!!!

According to pedigree.com, Lucy is 68 in human years.

What made it special was that Lucy is like a very sensitive antenna for how people around her are feeling, and she was crazy happy today at all the positive attention directed her way. According to the Berkin’s, since she lost most of the use of her hind legs, she rarely wags her tail. And yet, when presented with a beautiful homemade peanut butter cake, well, the photo doesn’t lie: 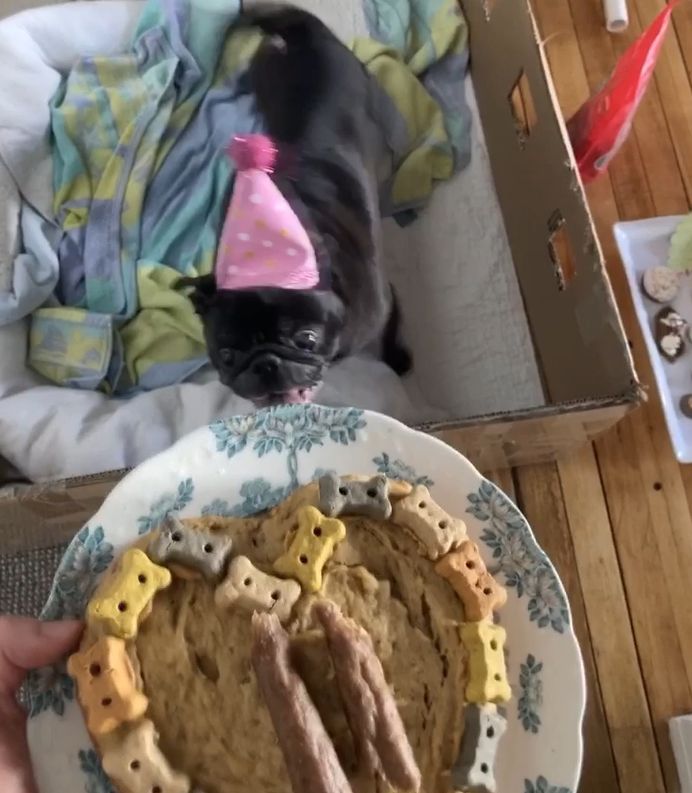 And there’s a lot we can learn from dogs. Dogs just keep it real. Don’t believe me? Ask the biggest dog of all: Snoop Dogg. It would be interesting including his major hit songs in a yoga playlist, but I’m pretty sure that there would be significant blowback because he gets a bit raw when he’s spittin’ bars (note: I had dreams at one point of becoming a famous rapper, so my apologies for speaking the lingo).

Maybe that’s why so many people feel incredibly close to their dogs. Dogs let you know straight up how they’re feeling. For example, Lucy is usually super chill, but when a few molecules of food odors hit her olfactory receptors, well, she transforms into a hyper-alert one-dog search-and-find juggernaut.

She doesn’t take the subtle approach but rather goes into beast mode. But she also has these moments where if she knows you’re sad, she’ll just sidle up to you with her big moist and empathetic eyes and put a licking on you (literally).

Isn’t it crazy how humans look forward to dogs licking us but it’s kind of gross when another human does it? 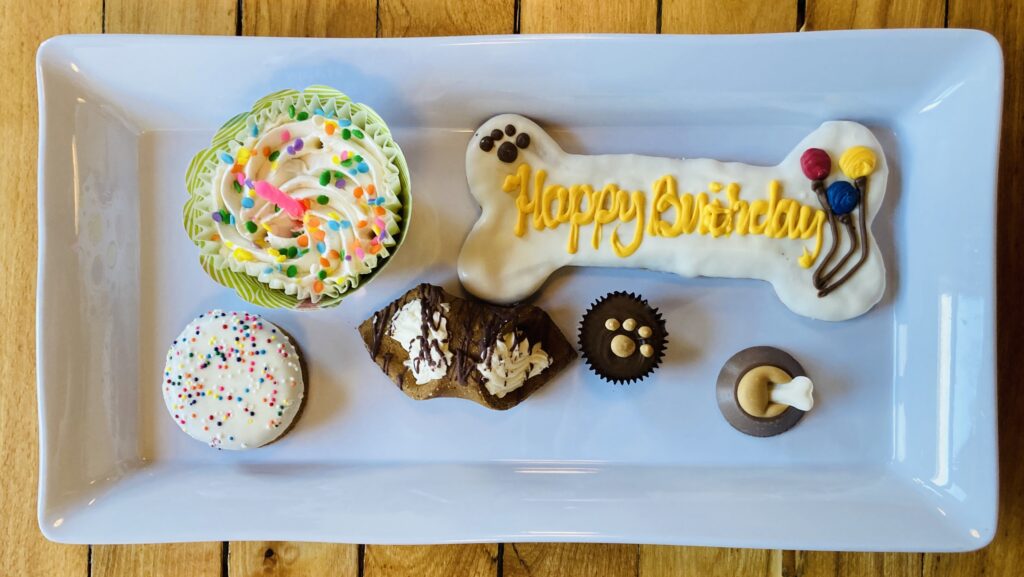 Anyhow, wanted to give a big shout out to Maggie’s Dog House (17 Main Street, Hingham, maggiesdoghouse.com) because they made all the fantastic-looking treats you see in this pic. And they must taste amazing because Lucy went crazy eating them, kind of like the first time I ever fed my little niece her first popsicle ever. 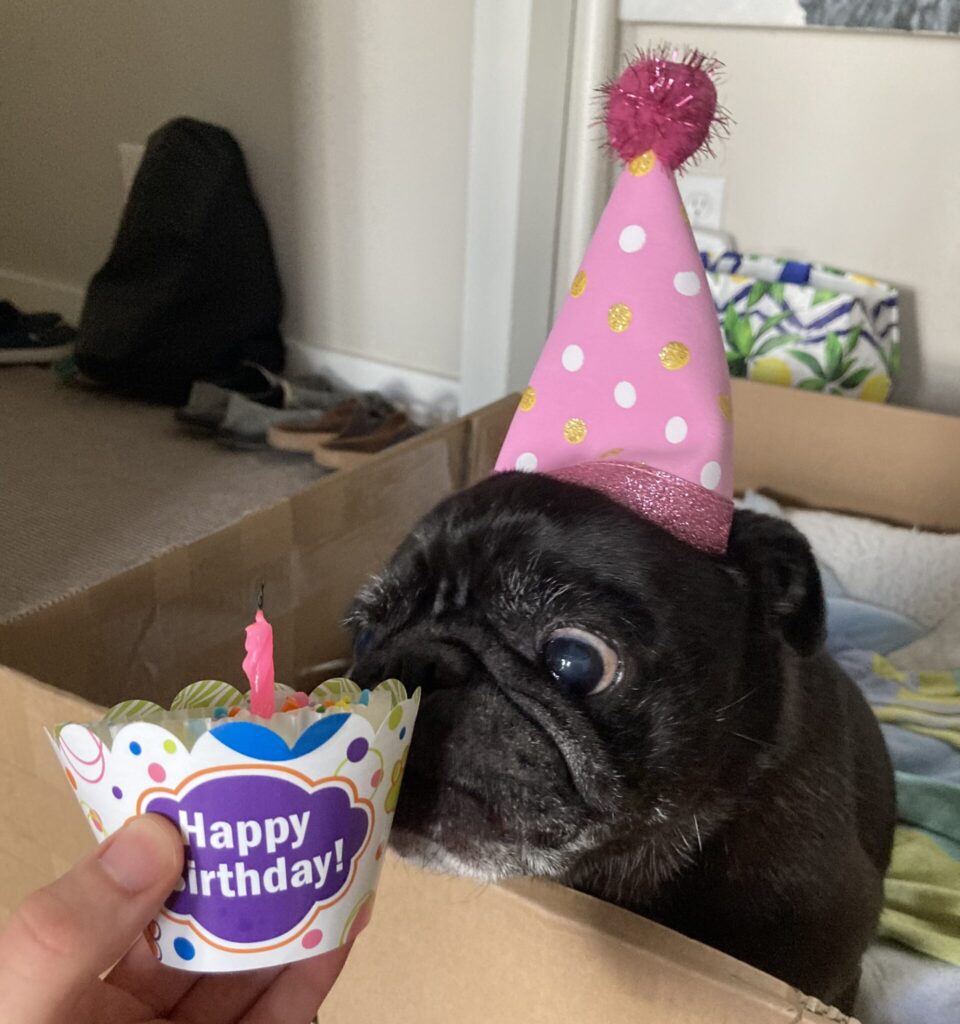 In case you’re wondering, everything you see in the picture was purchased. But I’m all about promoting local stores that sell fantastic stuff, and if you’re looking for something special for your special canine, well, Maggie’s Dog House is worth your while. Especially so since they’re next to another of my favorite local places Bloomy Rind. More on them in a later post.

The one area where dogs really excel is when they detect that a human is sad or in some sort of pain. There’s a reason why therapy dogs have become so popular. It’s not just that they give but also that their generosity of spirit inspires the recipient human to give back. And oftentimes when we’re grieving, the simple act of extending beyond ourselves to show kindness to others reduces our own grief. Kind of amazing… 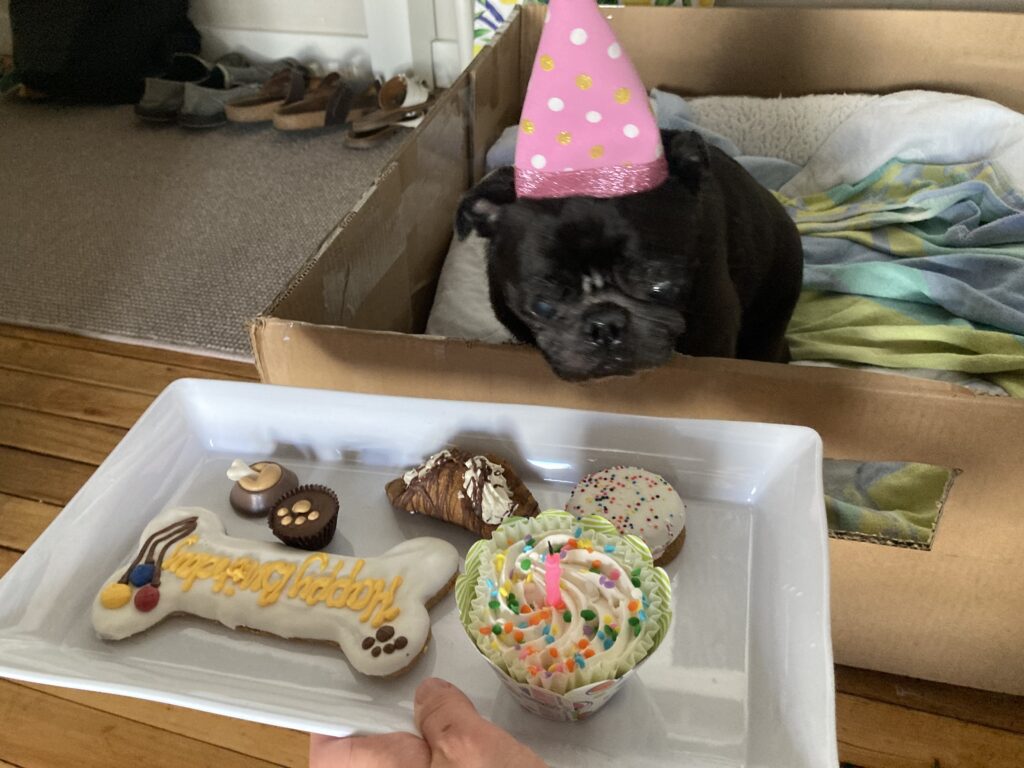 The last thing about dogs is the way they can happily surprise us. According to the Berkins, Lucy doesn’t like anything on her head. I think it has something to do with messing up her hairstyle. But lo and behold, she magically wore the most beautiful pink birthday hat a pug could ever hope to receive, and she wore it like she was posing for a photo shoot. 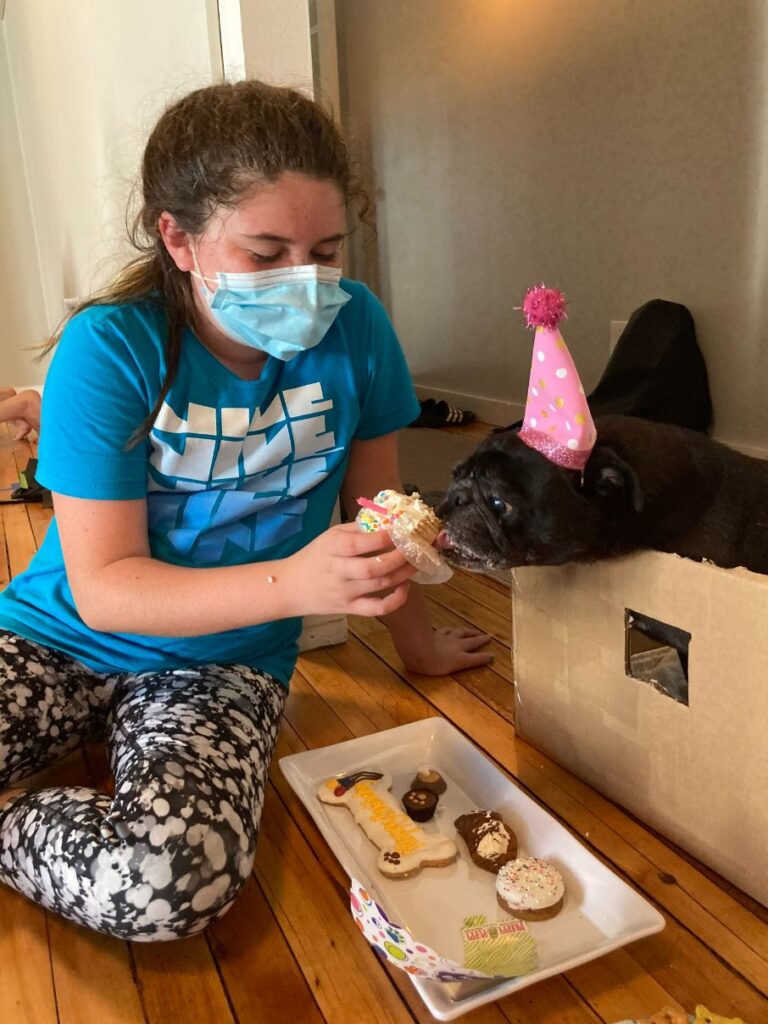 It’s kind of like that famous quote from the movie Field of Dreams: “If you build it, she will wear it.” Or something along those lines.

Maybe the coolest thing about the whole experience is that just as a 13-year-old female pug is old enough to have grandpups, I had the honor on Sunday of teaching my first class ever with 3 generations of ladies from the same family in it. Mother-daughter and father-son combos have always been great, but a Grandmother-mother-daughter trifecta? Super-inspiring.

Huge thanks to those who showed Lucy the love through their actions, words, and/or thoughts. I’m sure the Berkins will be rationing her treats because Lucy made out well on Sunday. And that’s probably a great thing because it will keep her constantly in the NOW for the next couple of weeks (or more). Yes, she received that many treats. 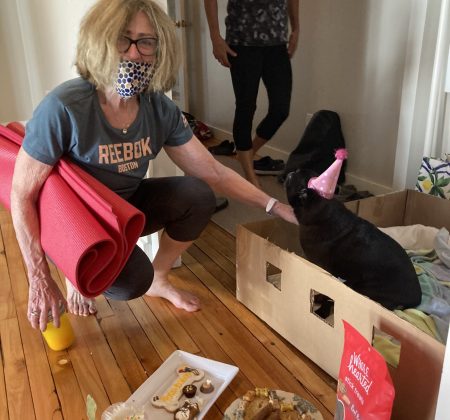 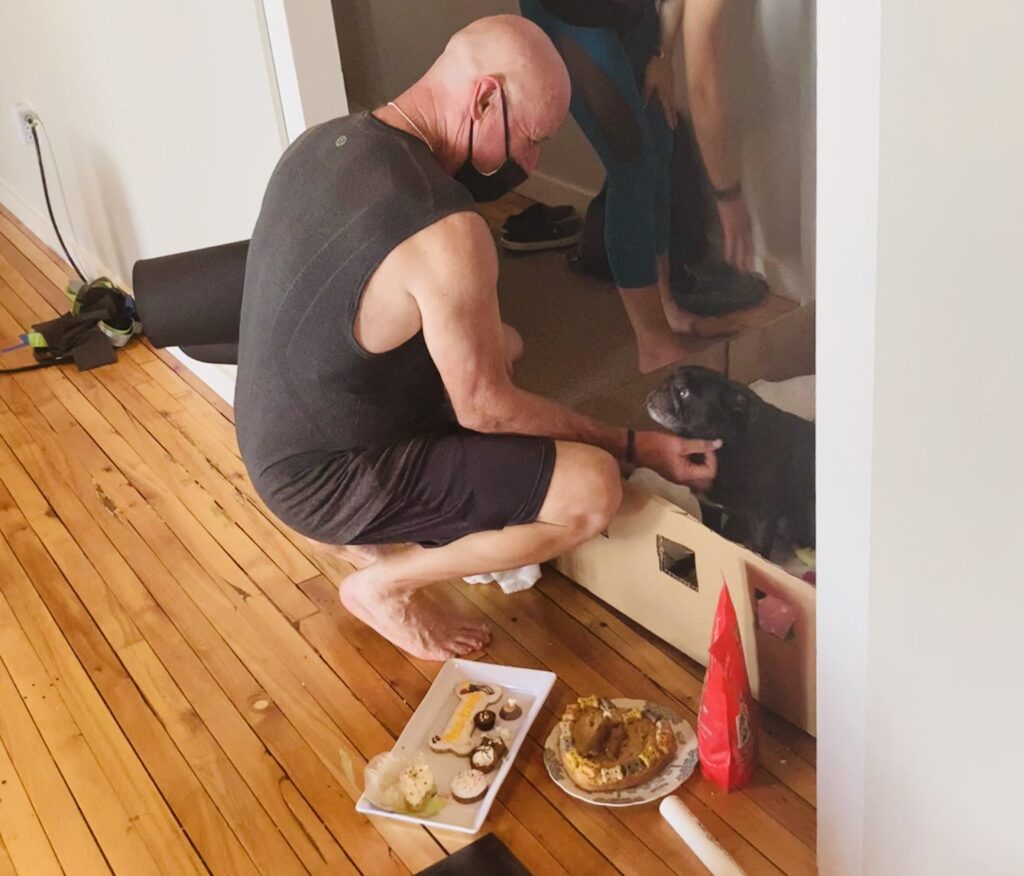 3 thoughts on “Lucy Berkin – The Return of the Pug Queen”